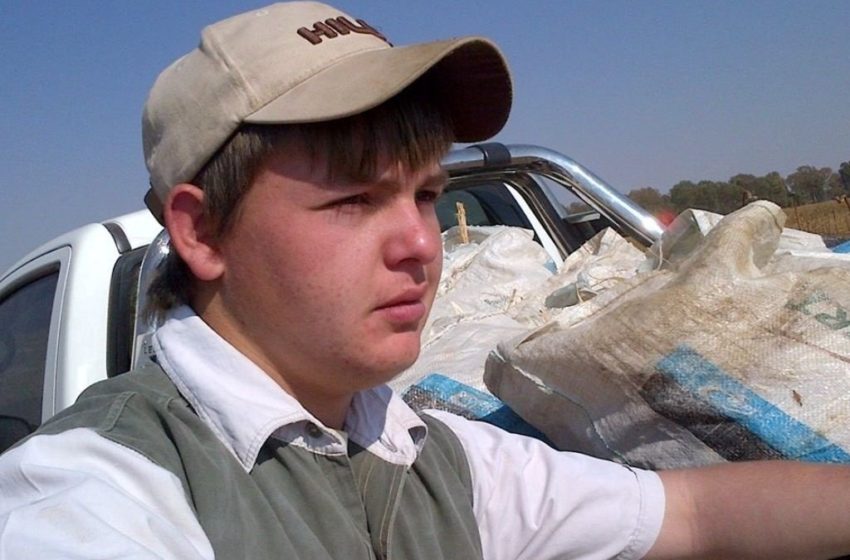 The body of Brendin Horner, 21-year-old farm manager from Paul Roux, Free State Province in South Africa, was found hanging from a pole last week after he  sustained fatal injuries at the hands of farm murderers. Brendin was an innocent young man with dreams and ambitions, and wanted to contribute to the nation’s food production chain. Brendin’s story is unfortunately not unique, as farmers and sometimes also their children are attacked, tortured and killed weekly on South African farms. The cruelty and unique nature of farm murders are outrightly denied by the South African government, and euphemised by mainstream media institutions. Ruan Goosen (23) investigated the facts surrounding farm murders in South Africa with the purpose of igniting a national discussion on solutions to curb this humanitarian crisis.

The agricultural sector has historically been a key player in South Africa’s economy, and in the country’s various cultural configurations. While this sector is indispensable for South Africa’s gross domestic product and food security, it is also the cultural and socio-economic ‘glue’ that holds together rural communities. Just as urban and rural communities are interdependent for food supply and consumption, farmers and rural communities are equally interdependent. Consider for instance schools for the children of farm workers, communal churches, job creation and other opportunities that stem from the initiative of farms and rural environments as a whole.

While farmers are the cornerstone of the complex rural ecosystem, a rising wave of farm attacks and the accompanying silence of public officials point to a total lack of understanding in this instance. Ideological and party-political reservations that prevent direct intervention in farm murders are literally destroying rural communities. The implications for these communities, and for a country that is entirely dependent on production in rural communities, are indisputable. However, a short-sighted reluctance to intervene altogether, which could allude to white farmers in particular being left vulnerable, hampers a meaningful understanding not only of the cruel reality for direct victims, but also of severe national consequences such as an impending food crisis.

The denial of the untenable reality surrounding farm murders and farm attacks is a humanitarian injustice and is bound to cost the entire South Africa dearly.

The indisputable increase in farm attacks and farm murders over the past three decades that was expected to lead to decisive action and national outrage, seem to have had the opposite effect, setting the table for an ominous political power game. Political parties across the spectrum use farm attacks as a vehicle to attract voters. From parties that dismiss the ‘fictional farm killings issue’ as a propaganda ploy to cultivate racial hatred, to parties alluding to a conspiracy plot by the ANC to commit genocide on white South Africans, the fears of the real victims and future victims are not allayed and the realities not addressed. On the one hand, the untenable reality of farmers and their surrounding communities is completely ignored, while on the other hand, erroneous statistics are used to sow panic among white South Africans and foreign stakeholders alike. The deception used on both sides even today means that sober and facts driven analyses of farm murders fall on deaf ears in the public domain. Meanwhile, farmers and rural communities can only dream of significant practicable solutions to a decade old phenomenon that is eating away at the core of their existence day by day.

However, let me steer clear of the above analytical pitfalls myself. The issue could be approached primarily from a statistical perspective. It would seem that not a single source is available to consult in terms of analysing ‘true’ crime figures, and even the South African Police Service (SAPS) has recently published unreliable statistics. The SAPS 2017/2018 provincial report dealing with crime on farms mentions only one farm murder in both the Western and Northern Cape, while news reports indicate that there were two farm murders in the Western Cape and three in the Northern Cape during that period. Fortunately, an analysis of farm murders can benefit from independent and more reliable figures collected with some difficulty by organisations such as the TLU SA, AgriSA, the Institute for Security Studies in Africa (ISS) and AfriForum. Consulting a variety of sources means a more complete picture can be gleaned of a rather complex issue.Allow me to first analyse the broader crime context in South Africa. According to Numbeo’s 2020 Crime Index, South Africa is the third most dangerous country in the world, while the United Nations Office on Drugs and Crime describes South Africa’s murder rate (34 per 100 000 people) as comparable to that of war zones such as Somalia (38,4 per 100 000), Afghanistan (40,4 per 100 000) and Iraq (40,3 per 100 000). Hence the familiar argument that farm murders should not be given special attention, because some 57 murders are committed every day in South Africa (a curious argument considering the recent prioritisation of murders on women, while 13% of people killed in 2018/19 were women). However, the nominal comparison between the number of farm murders and the number of nationwide murders is altogether inappropriate and should rather be analysed per capita: there are 59 million citizens and only 32 000 commercial farmers (2007 census). Accordingly, it is three to four times more likely (depending on how the per capita figure is calculated) that a farmer will be killed than any other person in South Africa. Putting this into perspective, the ISS found that farmers are twice more likely to be killed than police members in South Africa (51 murders per 100 000 police members).

Mere statistics could, however, detract from the human aspect of farm murders. The cruelty of these attacks should be considered to grasp the full picture. While most murders in South Africa are committed by impulsive players amidst a barrage of gang violence, farm murders are unique because of the particularly calculated and cruel way they are committed. According to Strydom and Schutte (2005), the violence and torture associated with farm attacks are generally much worse than in the case of similar attacks in urban areas. News readers regularly report that farm attacks are accompanied by the removal of body parts, boiling water or oil being applied, rape, and the phenomenon that attackers force family members to rape each other while the attackers watch. By analogy, there is a difference between an impulsive murder of a woman trying to protect her belongings from burglars, and a woman in a secluded area being raped, abused and murdered simply because she is a woman. Similarly, there is a difference between a murder in a densely populated area where the victim was impulsively stabbed with a knife during a confrontation and a murder on a farmer in a remote area that was planned for days to be executed in the cruellest way possible. Motive and context are important, while statistics tend to ignore these.

Apart from the fact that South Africa is in the first instance grappling with a humanitarian crisis as far as farm murders and farm attacks are concerned, the resulting ripple effects on the economy should not be underestimated. Although the loss of farming communities seriously impacts the surrounding communities that depend on farms for jobs and livelihoods, more importantly the cumulative loss of farmers and farms detrimentally impacts food security in general. According to Schutte (2004), every farm murder results in at least 30 to 40 people losing their jobs, while it takes about 18 months for production to commence on these farms again. The agricultural industry creates jobs for more than 700 000 South Africans, while many more secondary jobs arise from this industry. A large number of South African companies are dependent on the agricultural industry in one way or another.

Where to from here?

Although there are organisations and communities that have already suggested private solutions in an effort to fight the ‘soft war’ on farms, there can be no sustainable solution to the crisis without the cooperation of government and the police service. It is worrying that the government has thus far failed to express concern over the recent rise in farm attacks and farm murders, while President Ramaphosa himself has denied on international news channels that farmers are being killed in South Africa at all.

The first step in the right direction toward a sustainable solution should be for government to recognise the extent of the problem and prioritise this as a departure point for policy making. A practicable solution should involve government publishing more reliable and regular statistics on farm crimes and undertaking ongoing research on methods to curb farm attacks and farm murders. Moreover, all levels of government should collaborate with rural communities to overhaul security structures and to bridge the gap left in 2003 when government dissolved the commando system.

Local networks that respond quickly to an emergency signal have the ability to prevent farm attacks that are underway from turning into full-blown farm killings, in other words to thwart these attacks successfully. Although government is an indispensable role player, it should complement and support private initiatives rather than replace them or as a worst-case scenario trip them up. A continuation of the denial of farm murders and farm attacks within the ranks of the ANC – and especially by President Ramaphosa – is bound to cost not only farmers, but all South Africans dearly.