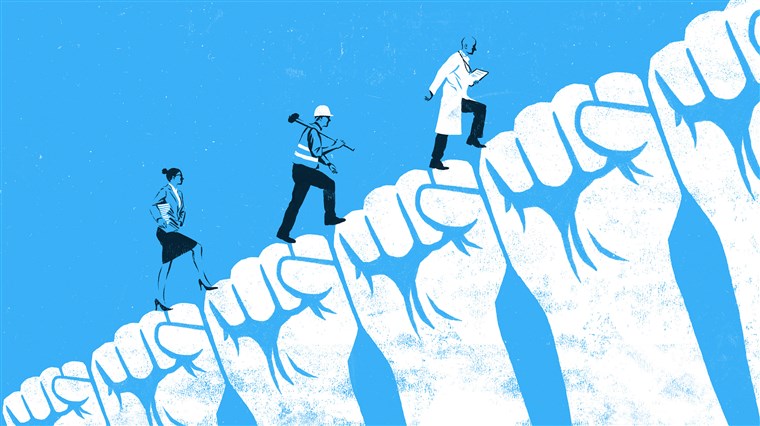 Established with the overtly-stated purpose of “representing and protecting the interests of workers”, trade unions have formed an integral part of our national infrastructure since they first appeared on the national scene in the 1880s. The racial turbulence that characterises our past has long provided the perfect justification for individuals with the most racist of intentions, to mobilise on the basis of their race to further their own interests at the expense of those they loathe. With a unique ability to mass-mobilise and force the hands of those in authority, the significance of trade unions – in shaping the South Africa we inhabit today – can hardly ever be overstated.

While the objectives of trade unions during (and prior to) apartheid had been distinctly political, the role they have played (and continue to play) post-apartheid is broader. According to StatsSA, total union membership has grown from 2,6 million members in 1997 to 3,26 million members in 2013. Further, the Global Competitiveness Report of 2014 – ranking employer and employee relations in South Africa as the worst in the world – stated that, “670 working days per 1000 employees were lost to strikes” and that, “strike activity (measured by lost working time) tripled between 1994 and 2014”. Evidently, trade unions have remained a monumental force in the South African landscape.

For most enterprises, the biggest cost of doing business is labour. A natural increase in the cost of labour is mutually beneficial to the employer, employee and customer. However, an artificial increase in labour costs has many victims. Firstly, hardly anybody would dispute that a group of workers can only earn above the market wage at the expense of those that cannot get into the labour market at all. The illustration below depicts this:

Secondly, in the event that an enterprise is unable to afford the higher wage, workers will have to face the prospect of retrenchment. However, since the trade unions do not allow for sudden retrenchments, they force enterprises to balance the higher wage by increasing prices. In a competitive market however, consumers will simply not put up with higher prices when cheaper alternatives are available – and nor should they. They will instead, start buying from cheaper alternatives, thereby driving the more expensive substitute out of business. It is for this reason, among a few others, that trade unions are less popular in the private sector. In fact, Labour Force Survey statistics prove this.

There is a very clear reason why public sector employees are more attracted to trade unions. Government agencies, no matter how high the costs of labour, do not go out of business. When unions demand higher wages for their members in the public sector, they can be fairly confident that their demands will be met. This is because even when there isn’t enough money in the fiscal purse, the government can simply go back into the pockets of taxpayers. For instance, research done by the Institute of Race Relations indicated that in seven of the eight years leading up to 2017, the growth of the public sector wage bill exceeded the growth of Nominal GDP. Public sector employee remuneration, at over 14% of the GDP, exceeded the OECD average of 10%. Further, in the event that tax revenue does not suffice, some governments have been known to resort to money printing, thereby making use of inflation to satisfy such wage demands. There are no market restrictors in the public sector, and the trade unions know this.

Rebuilding an economy after a socially – and economically – destructive event such as national lockdowns, requires transigence from all stakeholders. It is incumbent upon us all to make difficult – but necessary – adjustments to our lifestyles, for the welfare of the broader society. The rather impregnable nature of unions impedes on this need. The wage rigidity and political power that unions enjoy, leads to instances where, while everybody else has to accept wage-cuts, public unions threaten violence and total shutdowns if their wage-hike demands are not met. This is corrosive to both growth and democracy, and is completely untenable.

To truly be a virtuous representative of workers means to champion their interests both over the short term and the long term. By this account, trade unions come up short. By pushing for industries to artificially raise wages, they cause the displacement to workers by technology over the long term. This is because industries with the highest labour costs attract the most capital investment (misdirecting it away from the industries that need capital investment most). For example, AgriSA came out a few months ago to discuss why they opposed the new national minimum wage rate, arguing that it will lead to a “jobs bloodbath!”. Henry Geldenhuys, the president of the Transvaal Agricultural Union put it this way: “None of the role players want workers to earn an unreasonable remuneration or to lose their jobs. We only want the government to realise that farmers cannot afford the wage increases. We received feedback from a wide range of farmers and other role players in the value chain to indicate that they will be forced to make amendments to accommodate these changes. Unfortunately, most of them have decided to close all labour-intensive divisions, like growing vegetables, to switch to more mechanised ways of producing food”.

As politically unpopular as it may currently seem to those benefitting from trade unions, union monopolistic power is unsustainable and simply has to be curbed. For as long as unions are locked into powerful coalitions with hugely influential political organisations, the task remains an overwhelmingly difficult one. Nevertheless, the blueprint left behind by the late Margaret Thatcher for curbing union power remains a benchmark that we should visit while we still have the time. South African labour law, by protecting so staunchly the right of unions to picket and strike, seemingly encourages unions to make use of work stoppages as a weapon of first (rather than last) resort, leading to disastrous labour disputes. Union reforms in the form of limiting closed union shops and secondary strikes are certainly important in curbing union activity and ultimately, union membership.

More importantly, while the right to strike should undoubtedly remain protected, the decision to strike should, as far as reasonably practicable, be put in the hands of workers, and not solely in the hands of external entities that have their own political agendas. Extending on the following words from Dr Thomas Sowell, “…unions are for unions just as corporations are for corporations and politicians are for politicians”, it can be said that workers are for workers and that they, in collaboration with their employers know what is best. To balance the bargaining power imbalances that may exist, legally protected secret ballots are the solution. If workers are not satisfied with their working conditions, casting anonymous ballots to their employers will help alert the employers that workers are not satisfied, and that if nothing changes, they will resort to picketing. It is in many cases in the self-interest of employers to ensure that workers are satisfied.

In competitive industries for which there is an over-supply of labour, it is best to legally protect the right of workers to organise, and then step away and let the market work as a restraining force to both employers and employees. This is because in competitive markets, firms are constantly competing for the best employees. So, while an employer might want to pay his/her workers as little as he/she can get away with, the wages that competing firms pay their employees provides a check against this. Further, while workers may want to demand as high a wage as they can possibly get away with, the knowledge that there is excess labour waiting to replace them restrains this desire. Most crucially, this would make South African labour more competitive on the global scale, thereby attracting foreign investment, creating more jobs, and absorbing the unemployed labour waiting on the fringes.

Giving (and protecting) more bargaining agency to workers, themselves, remains the surest way to ameliorate what is an otherwise unsustainable agreement. The interests of workers comes secondary to trade unions. The primary objective of unions is to safeguard their own political clout, and the sooner we realise this, the better. To give more bargaining agency to workers necessarily requires a reduction in trade union power because the more the trade union negotiates, the less the individual workers can. Most importantly, a move of this nature would concurrently address the democratic, fiscal, cost-push and unemployment challenges raised earlier. By bringing the secret ballot box into the workplace, it brings democracy back into the workplace. By limiting closed union shops and secondary strikes, among other things, it reduces union action and ultimately, the strain on the fiscus and the unemployment figures. Undoubtedly, this will, in the short-term lead to a loss of union benefits that many South Africans currently enjoy. However, if we are to improve labour relations in our country over the long term, we have to recognise that a loss of union benefits is certainly not as agonising as persistent unemployment and fiscal instability.